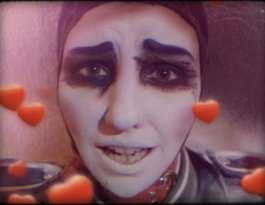 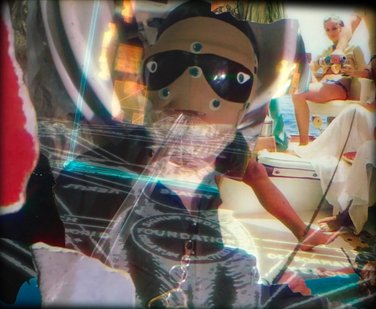 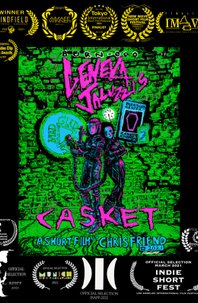 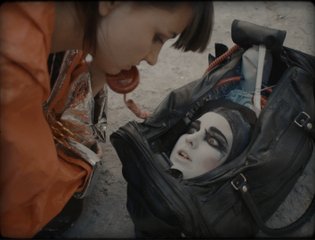 But all this varied and rich collage of various visual styles, mixed in quick planes that succeed rapidly, or even in the same scene, is connected to the plot of the short film. After all, roughly speaking, the images are related to the Biodrone, the amputated head that continually calls its owner Kate's brain through strange visions.

Of course, the story proposed for the music video can hardly be captured by the viewer, except with a previous reading of the synopsis. In this sense, Casket is more sensorial than narrative. However, this is not really a problem when it comes to the music video format.

Kate Shaw is massively frustrated. She has several shipments of experimental Emote Cartridges past due for delivery to the World Wellness Watch, the current one-world government. Kate is going to miss the deadline. Execution is likely.

The Pleasure-U BioDrone, her only assistant, has contracted an undiagnosed mental-disease. Kate Shaw is forced to amputate its head and keep the body alive in the PleasureCenterCasket, normally reserved for paying, near deceased clients.

The BioDrone’s head, inside a reprogramming bag, continuously calls to Kate’s brain with strange visions.

So in "Casket" this nostalgic futurism is present since its opening, when simple drawings carry us into a head and a brain. Music with pulsating synthetic bass contributes in pushing us in. Additionally, dialed phone noise definitely marks that reference to the 1980s. In this sense, the excerpts with the character multiplied to infinity, also typically vintage, stand out.

On the other hand, the variety of visual styles in the dozens of small planes obviously includes modern visual effects. For example, the touch screens in the air, or graphical user interface, that became famous in the movie Minority Report, are present in the clip.

Leaving the references aside, the visual effects themselves are notable. For example, the head of the android kept in a backpack manages to be very convincing while dubbing the song, when she assumes the lead voice in the song. Likewise, we also praise the holographic figure that is substituted by a mannequin, and many other well-applied tricks.

After all, Geneva Jacuzzi’s Casket achieves the main goal of a music video. That is, it translates the spirit of the music into images. In this case, in addition to director Chris Friend's creative work in building a richly varied look, the film features the artist's talented protagonism as a dramatic performer.

The music video for the song "Casket" by artist Geneva Jacuzzi, directed by Chris Friend, has a richness of unique visual varieties. The science fiction environment built in this short film has different influences. But essentially deals with the pop world of the 1980s, especially that electronic techno music started by Kraftwerk in the previous decade that later influenced artists such as Joy Division and Depeche Mode. And this reverberates in the work of Geneva Jacuzzi, not only in music, but in aesthetics.

And the makeup and the costumes is able to create different characters, all played by Geneva Jacuzzi, each one distinguishable from each other. Even though it is a music video, we also notice that this differentiation works because the singer herself is a great actress. At least for the purposes of this musical format.