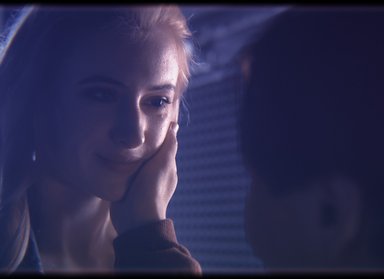 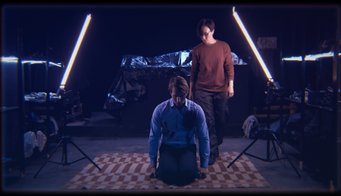 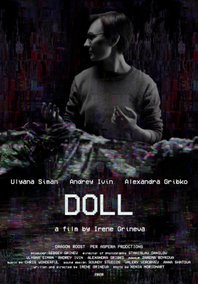 The movie begins with a subjective camera from the point of view of an android. As he manages to escape, we are presented to Chloe, the main character. It is interesting that we can notice right away that we are seeing with the eyes of a robot, as there are some sort of sparks in the image. Later, when the protagonist is in her workshop there is another android laying down on a table, turned-off and partly disassembled. In other words, this tells us what she does with her preys.

In this sense, the cinematography is predominantly dark, which helps to cover up any flaws that the production design might have. Moreover, the director Irene Grineva uses short takes, mostly with fade-outs in the transitions, thus also collaborating to depict the futurist mise-en-scène, while adding a fast rhythm to the narrative.

On the other hand, the action scenes respect the limitations of the budget. In other words, the two scenes of confrontation are only suggested, so don’t expect to see any guns firing. And that’s a wise choice. Due to the low budget, the action scenes that demand a high cost of special effects are better off suggested, than made with poor results.

In summary, Doll is a substantial showcase of the capacity of its director, cast and crew in creating a convincing sci-fi with an extremely low budget.

In dystopian near future Chloe, an apt mechatronics engineer, lives a life of a recluse in her shop, and tries desperately to make ends meet by hunting stray androids at night. Meeting Isaac, a naive survivor of her last assault, changes her life... Or, does it?

Additionally, the story has a surprise twist in the scene after the confrontation between Isaac and Lola, the female android in charge of collecting the rent from Chloe. When we see Chloe and Lola walking in the workshop together, all laughing and friendly, we wonder what made their relationship so close. So, it turns out to be Isaac in the body of Lola, which is another great idea in Doll’s plot.

However, the standout quality of Doll is its production value. Although having a low budget, director Irene Grineva and crew managed to capture a believable futurist scene. Of course, it is a dystopic environment, so it is easier to depict than a full-of-neon-Blade-Runner-like future. Anyway, the production team used a lot of creativity to make this all look convincing. For example, the use of light inside the arms of the androids to show information such as a malfunction or the battery level.

The Russian short film Doll surprises us with a thoroughly designed mise-en-scène that convinces us that the story takes place in a dystopic future. That’s where the protagonist, Chloe, hunts androids to dismantle them and sell their parts.

The plot actually takes of when this android, whose name is Isaac, accidentally ends up at her door asking for help. Although Chloe recognizes him, Isaac doesn’t know that she is the responsible for shooting at his chest. That’s the incident that triggers the change in the protagonist, which therefore builds the narrative arc of this main character. Instead of using Isaac as a source of new materials to sell, she decides to help him.