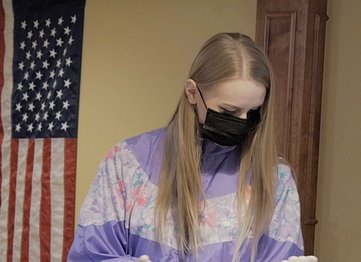 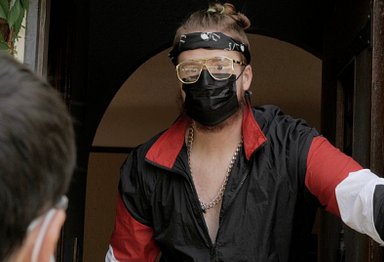 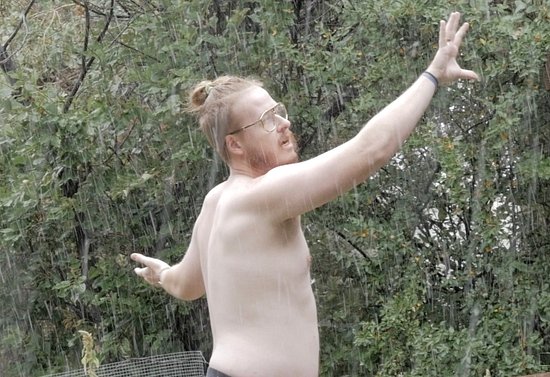 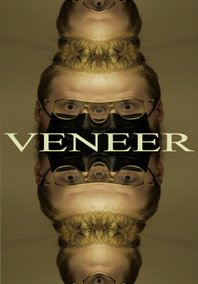 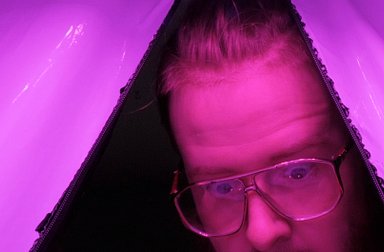 Veneer then turns into an enigmatic movie. The pieces of its puzzle are shown, but the explanation is up to the viewer. And it seems the plot may get serious and even darker as it involves the kidnapping of a young woman. We immediately connect it with women kept captive in movies like Room (2015), but soon it will be revealed that in this case the situation is more fantastic.

The plot of Veneer is revealed gradually. At first, it seems that this movie is basically a comedy, as its first part portrays the protagonist Dominic Willis narrating how he is like, while we see at the same time what he is in fact. It is funny and it could keep on this path and invest on it. However, when the character narrates, he uses cocaine and we see him actually doing it on screen, the joke is lost.

Essentially, there are three actors in Veneer, all of them playing the alien invaders Dominic, a girl and the last one, who is the leader. As their parts demand, they exaggerate their performances because they cannot look like normal people. Thus, their acting tend to be comic, specially of the two male actors.

Covid-19 inspired this sci-fi, along with the old B-movies of the genre. Veneer’s plot refers to the pandemic as a part of an alien recreation plan. The tone is comedic, but not overtly, like it is when we watch today those old sci-fi movies.

Eventually, the key clue to solve the mystery of Veneer is the scene where Dominic tries to mocker the pictures of himself that are in his cell phone. And in the same way is the reappearance of the kidnapped girl now acting strange. Those two moments indicates the alien plan with subtlety.

The production of Veneer reveals its low budget through the reduced number of actors and extras, which make the exterior scenes artificially empty. However, this is compensated by director Maximillian Aguiar who applies a rich variety of shots instead of long takes, and even some bird’s eye views – now affordable with drones. Nevertheless, the plot allows to justify the absence of people as a result of the social isolation.

It is also possible to find some moral lessons in Veneer, at the same time against the use of drugs and materialism. The criticism against drugs is implicit as the alien virus is mixed to cocaine and then spread in the community. In the same way, Dominic infects dollar bills and spread them out in the park.

Sci-fi movies of the 1950s and 1960s dealt with the fear of nuclear power, so many of them had monsters created by the effects of radiation, such as gigantic ants and WASP women (as the footage shown in Veneer). They also were used as a tool to criticize the fear of communism and the paranoia to point out who was infected, as a metaphor to who were communists - and Invasion of the Body Snatchers is a classic example. Veneer unites these two fears – the disease and the paranoia - that Covid-19 has again put in evidence in humanity today.

The conclusion of Veneer is a bit disappointing. After all, the resolution comes out without conflicts, so the aliens achieve their plan without a climatic ending. So, Veneer has an interesting story, it is thoroughly directed and has competent acting. However, it fails to deliver a thrilling conclusion.

There is a great number of songs played during the movie and they are essential to outstand the tone of the scenes. In fact, they are the main resource to define the comedy in the scenes, along with the exaggerated performances of the actors. Both music and acting are key features to avoid that the movie turns into suspense, as the allows the plot.

By the way, the movie uses the restrictions due to the Covid-19 to trigger ideas for the screenplay. Firstly, as a comic catch-phrase that Dominic repeats all the time – with his drug client, his neighbor etc. Second, as an excuse for him to avoid interacting with people, as this would endanger his secret mission. And most importantly, as the general idea for the plot.